A vibrant mixture of gun dog enthusiasts came from as far as Austria to participate in a gun dog weekend which was aimed at raising funds for Help For Heroes and ABF (The Soldiers Charity). Twistmount Gun Dog weekend was held in the beautiful location of Moorwood Farm, by kind permission of Mr & Mrs Drinkall. The stunning farmhouse and grounds were the perfect setting for this unique event and offered  all the ingredients for various challenging  tests and scurries. The event seemed like just a glimmer in Neil Varney's eye last year and after  months of hard work and dedication it was transformed into reality.  For my husband and I it was an invitation to escape the hustle and bustle of daily life and immerse ourselves in the beautiful Somerset countryside, raise money for a worthwhile cause and enjoy watching some of the top gun dogs in the country.
The early morning mist was beginning to clear in the fields as we arrived in Bruton.  A thin layer of silver mist cloaked around the huge oak trees in the field as we parked up. 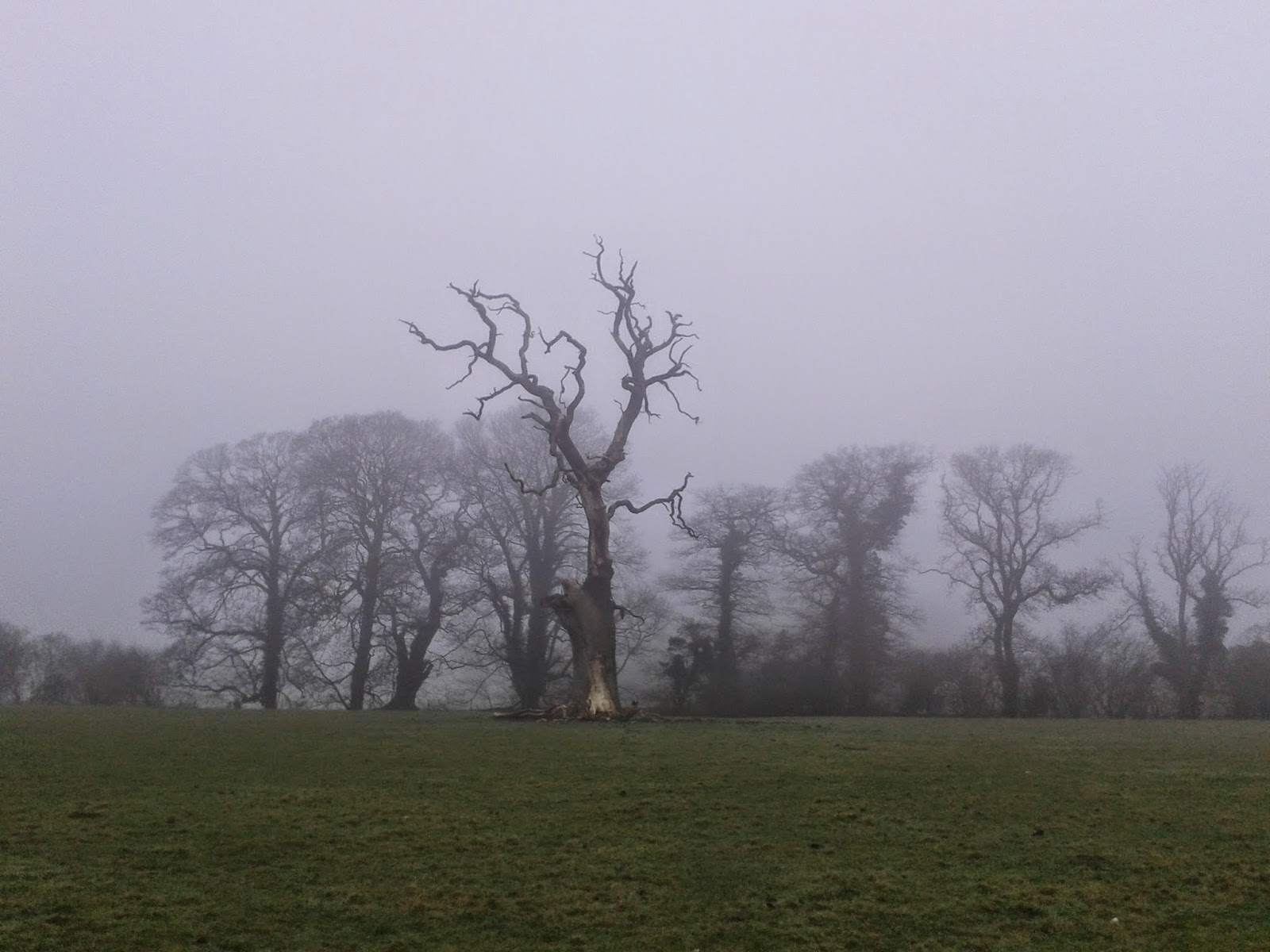 The grey sky was overcast and there was a light breeze.  Neil's team were on standby at the entrance and directed us towards the farmhouse. We had an optimistic feeling that the last dregs of our wet weather were behind us...just  for today. The aromas of coffee and bacon sarnies emanating from the catering van wafted down the drive.  The competitors for the AV/KC novice tests were registering  at the check in desk and we could feel a sense of excited and anticipation of the day ahead. A mixture of gundogs and handlers gathered together. Neil had also organised fun tests and scurries for the public to have a try. Chris Walton had been invited to judge the fun working test. She said "This fun test gives handlers and dogs an opportunity to gain an insight to the working test  environment and have a go at various tests aimed at spaniels and retrievers. It's a great day out and something for everyone."
It was clear that Neil and his team had been inspired to create something they were passionate about and make their chosen idea more than just an event. It was a unique opportunity to raise money for ABF/HFH and invite the gun dog community to come together and enjoy their passion and interests. 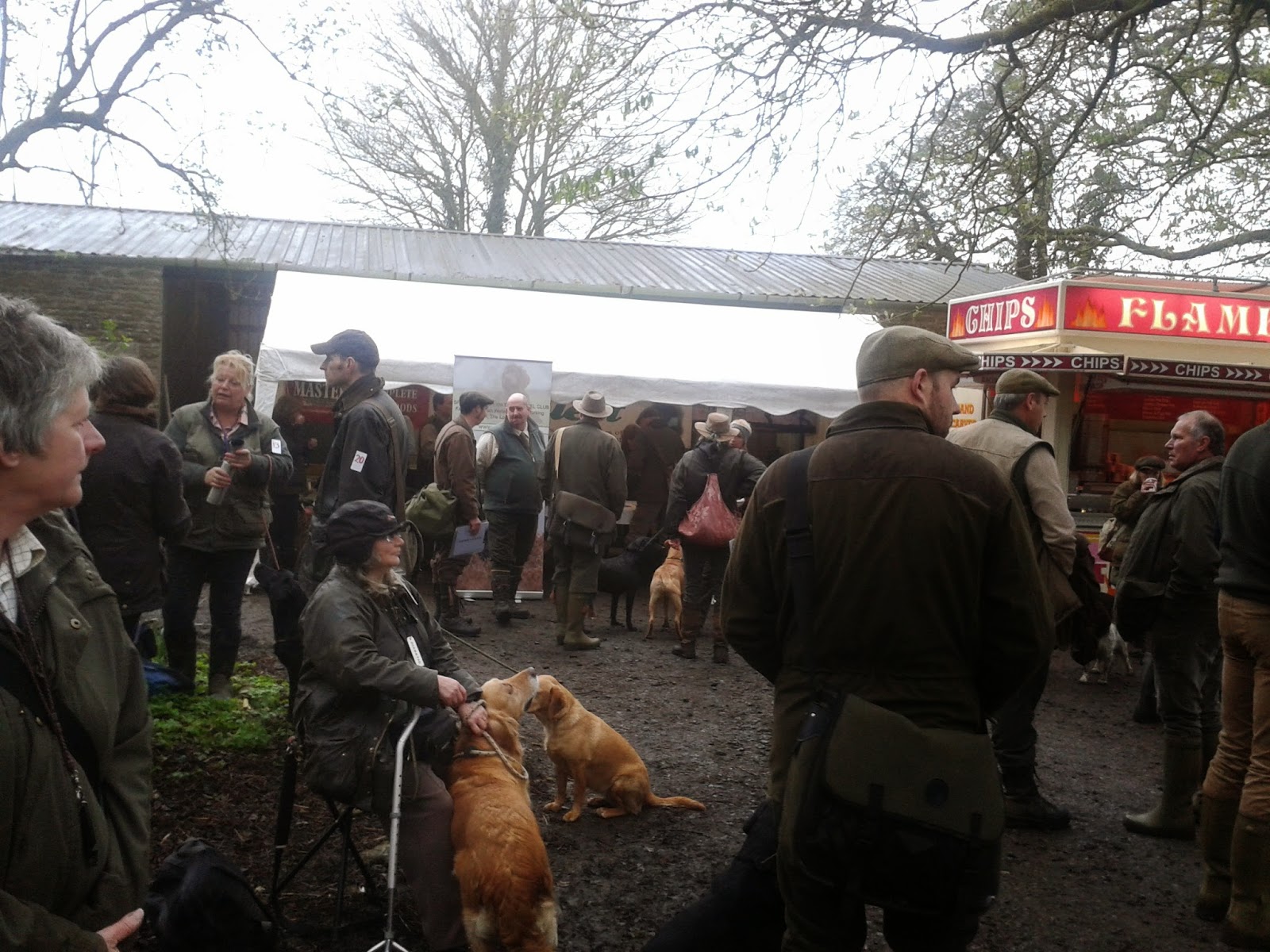 I had entered Ivy into the AV KC Novice Retriever  class and I was a little nervous as it was my first official AV working test. For me handling is about enjoying the tests and  I believed as a team we were ready for the day ahead.  Once all competitors had registered we headed off in groups towards the first retrieve.


Gilly Nickols was our first judge and explained we had a tricky start with a double blind. The test was challenging and Gilly was extremely supportive. I managed to stay calm, focus and think about my  commands as I sent Ivy out. She successfully retrieved the first blind with little encouragement from me.  On the second  retrieve I needed  to stop her several times and send her back further which enabled her to pick up the dummy and deliver nicely to hand.


Test 2: Seen retrieve off to the left into undergrowth. Another shot fired  and blind retrieve straight ahead.
No problems with the first retrieve and Ivy delivered nicely to hand.   The challenge for me was the second retrieve. I sent Ivy out to the right but due to handler error I pushed her too far to the right. With some handling I managed to get her back and she winded the dummy and retrieved it nicely to hand. This was a challenging test and  fully tested some of the dogs as well as the handlers.
Test 3: Long seen retrieve with shot in open woodland followed by a blind with shot in the same area.


Ivy marked the first retrieve and went out clean with very little commands from me she delivered perfectly to hand. The second retrieve took some time! I managed to get her in the right area but she just couldn't wind the dummy. I persevered and with lots of verbal handling she eventually winded the dummy.  The judge was patient, supportive and encouraging!
Test4: Split seen retrieve marked by 2 shots into water.  Handler had to indicate which dummy was going to be picked first.


As I took Ivy's lead off I had a feeling she wasn't steady. Being a young dog and her love of water made me think I had a challenge here with her steadiness. Did she pick up on my concern? Within two seconds of the second shot being fired Ivy had ran in. Keith Broomfield who was the judge suggested I let her retrieve the dummy. Once she delivered it back to hand I sent her out for the second dummy. The judge was very supportive and encouraging with his feedback. My lack of training in this area was evident and something I need to work on.
The retriever  judges  were all very approachable following the prize giving and offered some valuable feedback. In the afternoon  I asked the judges for some general feedback.  Keith Broomfield said  "I've seen lots of good dogs on my water test today but just need more training to be able to get it right. They were all keen and enthusiastic and there wasn't one that didn't want to do the water retrieve. There were a few which had a couple of problems like dropping the dummy, a few ran in, some went for the wrong dummy but with a bit of work in training they'll all make good dogs."
Keith added " I gave a lot of zeros today but it wasn't because they were bad dogs. It's just a lack of training. There were some novice handlers that haven't done a lot of training yet to get the dogs right. In a year's time I imagine they will be different dogs. I enjoyed watching them today and there were plenty of dogs with potential."


The judge for test 2 said "There were a good range of standards in my test ..some dogs getting 20 and others getting 0 and a few in between."
One particular handler who certainly caught the judges eye was  Toby Boatswain with Aquacadisns Irvin. His outstanding performance gained him 1st place for the KC Novice Retriever Test. 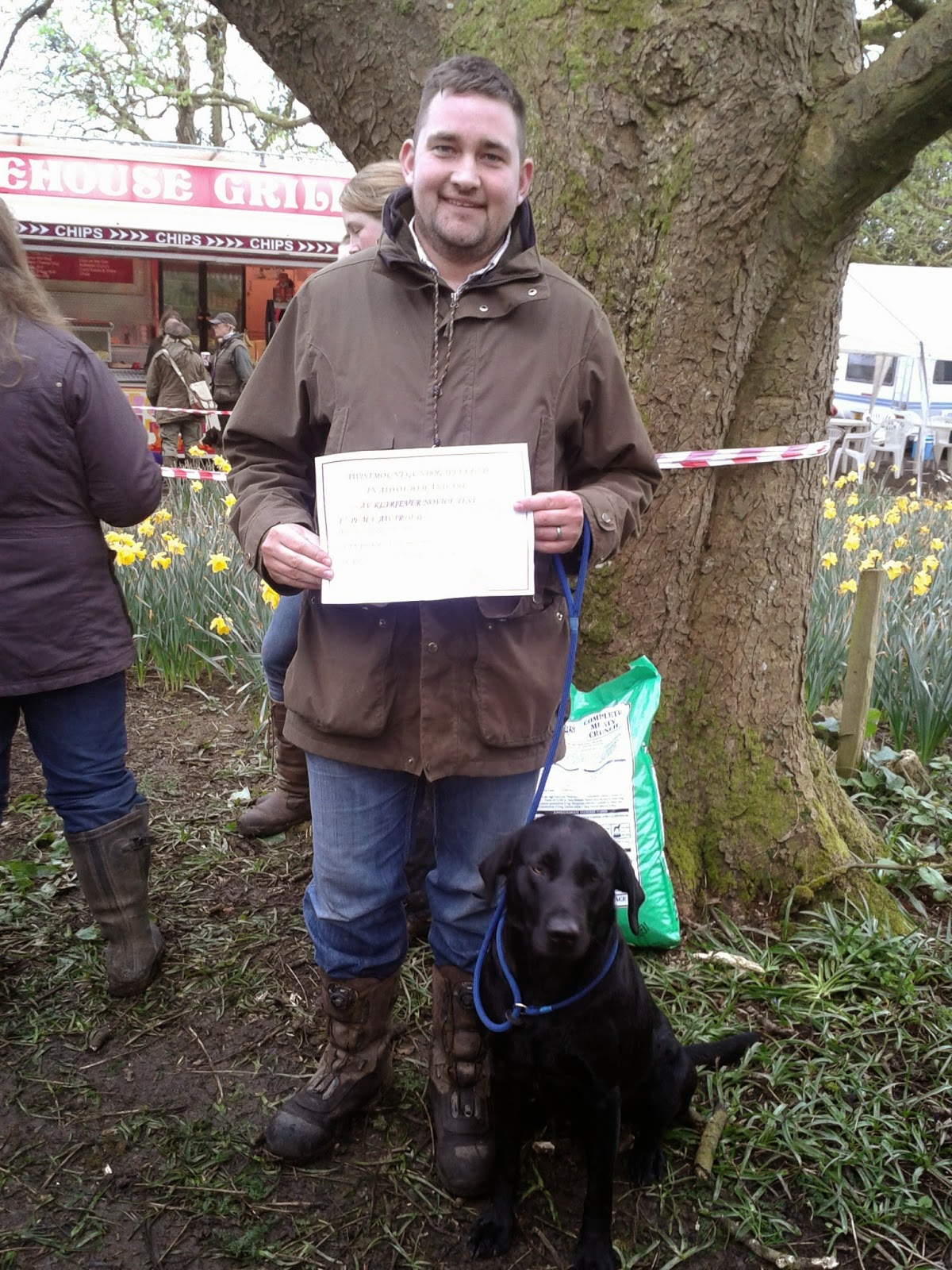 Beaming from ear to ear Toby said " We got on well today. There has been a good atmosphere throughout the day. The tests might have seemed simple but they  were challenging for the dog and handler. "
Toby added " I need to work on blinds. There's always room for improvement!"
Hilary Hardman with Willow Creek Flint of Luvixolbeck silver snow drop of luvixolbeckWillowcreek Flint of LuvixolbeckWillowcreek Flint of LuvixolbeckWillow Creek  was awarded 2nd place and was delighted with the result. Both worked hard as a team and stayed focused throughout the morning. I was able to observe Hilary work her dog in the water retrieve and I admired  her quiet and confident handling. I also saw this with Ben Thompson. I was fortunate to watch Ben in most of the tests and his handling was calm and focused. Both a pleasure to watch!
Participating in Twistmount tests gave the opportunity to demonstrate the dog's abilities and the skill of the handler. It has highlighted areas I need to work on and I have seen Ivy's progress and identified her strengths. I left Twistmount with a  sense of personal achievement. I was so proud of Ivy and it felt wonderful to be part of a HFH charitable event. It was a thoroughly enjoyable  and fun day. Working tests are  part of my  gun dog journey. I'm observing and learning  fundamental skills  from the judges,  handlers and dogs which I hope to embed in the future.  My blog with Ivy continues...
Posted by Unknown at 06:15

I Love My Gun Dogs